Tumor induced sprouting angiogenesis is the process of new capillary growth from an existing vasculature, induced by tumor cells that have the “angiogenic switch” turned on. Vascular endothelial growth factors(VEGF) released by tumor cells diffuse through the extracellular Matrix and stimulate endothelial cells lining existing vessels in the proximity of the tumor to form sprouts. As the newly formed sprout tips migrate through the ECM, deﬁning the morphology of the dgradients determine their migration paths.

A 3D Model of Sprouting Angiogenesis

We have developed a novel model of sprouting angiogenesis that  quantifies several biological assumptions and their dynamic interactions. This enables the identification of critical factors in the process of angiogenesis and paving the way for future integration of experimental data. 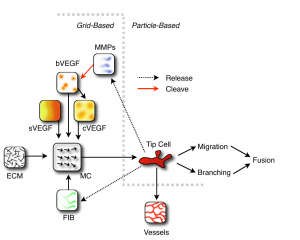 Matrix Metalloproteinases (MMPs): Primarily involved in the degradation of certain ECM proteins. MMPs are released by the endothelial sprout tip cells and diffuse through the ECM. Upon contact with matrix-bound VEGF and transform it into a soluble form (cVEGF).

Migration Cues (MC): For the endothelial tip cells as combination of chemotaxis, haptotaxis and the structure of the ECM.

Endothelial Tip Cells (EC): Guided by migration cues as they define the morphology of the capillary network.

Vessels: Vessels are represented by the endothelial cell density. The density is given by the track of the tip cells.

The implementation of this model allows for a large scale parametric study of blood vessel morphology as inﬂuenced the structure of the ECM, the distribution of matrix-bound VEGF and the intensity of cell-cell and cell-matrix adhesion.