The diagnostic assessment of fetal arrhythmias relies on the measurements of atrioventricular (AV) and ventriculoatrial (VA) time intervals. Pulsed Doppler over in and outflow of the left ventricle and tissue Doppler imaging are well-described methods, while Doppler measurements between the left brachiocephalic vein and the aortic arch are less investigated. The aim of this study was to compare these methods of measurement, to find influencing factors on AV and VA times and their ratio, and to create reference ranges.
Echocardiography was performed between 16 and 40 weeks of gestation in normal singleton pregnancies. Nomograms for the individual measurements were created using quantile regression with Matlab Data Analytics. Statistical analyses were performed with GraphPad version 5.0 for Windows.
A total of 329 pregnant women were enrolled. A significant correlation exists between AV and VA times and gestational age (GA) . No correlation was found between the AV:VA ratio and GA. All measurements differed significantly amongst the studied methods.
AV and VA intervals increase proportionally with GA; no other independent influencing factors could be identified. As significant differences exist between the three methods of assessment, it is crucial to use appropriate reference ranges to diagnose pathologies.

The knowledge about adaptive mechanisms of monochorionic placentas to fulfill the demands of two instead of one fetus is largely speculative. The aim of our study was to investigate the impact of chorionicity on birth weight and placental weight in twin pregnancies.
Forty Monochorionic (MC) and 43 dichorionic (DC) twin pregnancies were included in this retrospective study. Individual and total (sum of both twins) birth weights, placental weights ratios between placental and birth weights and observed-to-expected (O/E)-ratios were calculated and analyzed. Additionally, we investigated whether in twin pregnancies placental and birth weights follow the law of allometric metabolic scaling.
MC pregnancies showed higher placental O/E-ratios than DC ones, whereas the total neonatal birth weight O/E-ratios were not different. In DC twins total placental weights correlated significantly with gestational age, but not in MC twins. Analysis of deliveries below 32 weeks revealed that the placenta to birth weight ratio in MC twins was higher than in matched DC twins. Allometric metabolic scaling revealed that dichorionic twin placentas scale with birth weight, while the monochorionic ones do not.
The weight of MC placentas compared to that of DC is not gestational age dependent in the third trimester. Therefore an early accelerated placental growth pattern has to be postulated which leads to an excess placental mass particularly below 32 weeks of gestation. The monochorionic twins do not follow allometric metabolic scaling principle making them more vulnerable to placental compromise. 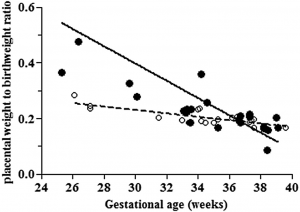 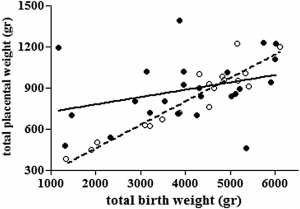