90% of cancer metastasis is caused by Circulating Tumor Cells (CTCs) which intravasete the bloodstream from a primary tumors. The detection of CTCs in the blood is one of the most potent methods for the early diagnosis of cancer. However, with 1 CTC present for every 1’000’000’000 RBCs, this detection is equivalent to finding a ”needle in a flowing haystack”. This challenge has led to a wealth of activity in developing microfluidic devices for high throughput cell separation. The design of microfluidic devices relies on the quantitative understanding of the behaviour of cells and fluids confined in complex, microscale geometries. However, the acquisition of information for the microrheology of fluids remains a formidable experimental task. Without such information, the unique, and often unexpected, properties of fluids at the microscale can be a hindrance for new designs, while complex prototypes may be impossible to manufacture at an economy of scales. Predictive simulations capable of handling complex systems at sub-micron resolution, are becoming an invaluable companion to experiments to accelerate the design cycle and innovation in microfluidics.

We consider the CTC-iChip microfluidics device, which is arguably the most effective device in isolating CTCs and WBCs from hundreds of thousands RBCs by taking advantage of the deterministic lateral displacement effect. We plan to enhance the accuracy of the simulations and to optimize the geometry by employing detailed models with quantified uncertainties. Our efficient software implementation allows us to investigate flow behavior at high RBCs concentrations, which remain prohibitive for other state-of-the-art methods and codes.

We employ uDeviceX, an in-house particle based code for simulating blood flow. We use Dissipative Particle Dynamics for solvent and a viscoelastic membrane model for both CTCs and RBCs. The code is able to reach 65% peak performance in terms of instructions per seconds on 18’688 nodes of the Titan supercomputer.

The predictive capabilities of DPD models hinge on their parameters that are usually validated from various experiments. However these parameters may vary drastically and are not transferable across experiments. In our lab we estimate the RBC model parameters using classical and hierarchical Bayesian inference techniques. We revisit classical experiments of stretching and tank treading blood cells in shear flows and examine through the Bayesian model uncertainty the capabilities and limitations of the RBC model.

During the course of their circulation, RBCs undergo severe elastic deformation as they flow through narrow capillaries whose diameter is as small as 3um. For the calibration of the elastic properties of the RBC model, the elongation of the RBC is analyzed under various stretching forces. We consider data available in the literature, from studies of the mechanics of single cells, subjected to a variety of well-controlled stress-states. 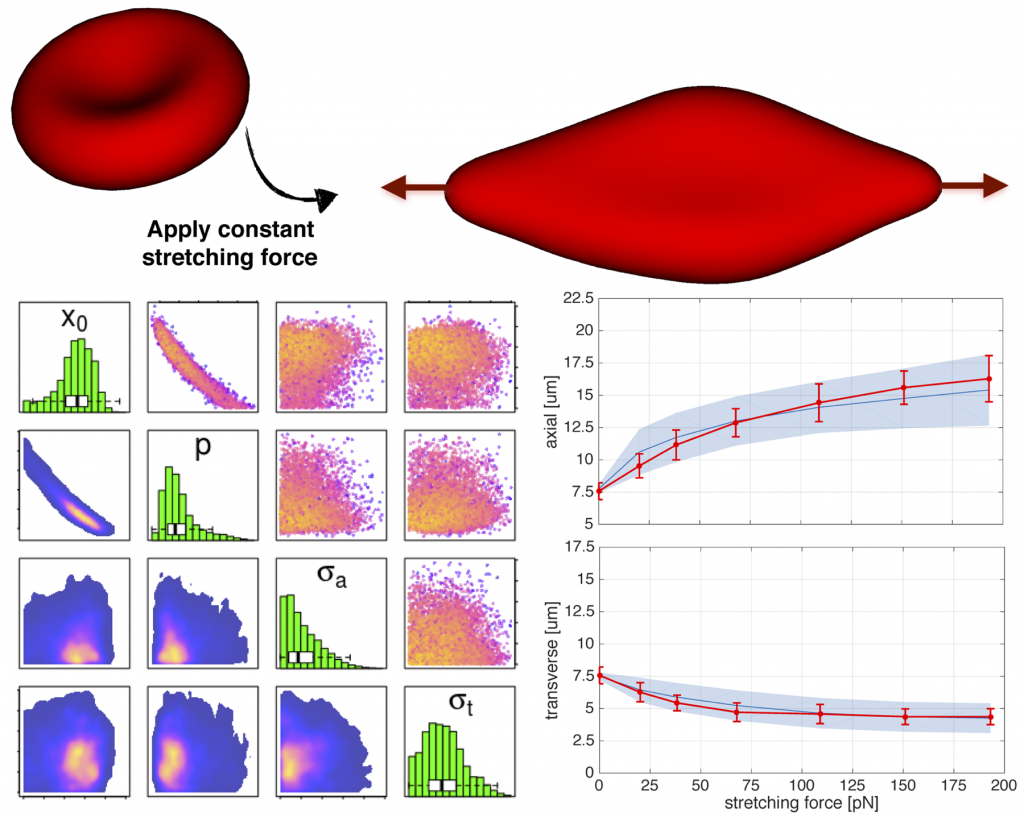 There exist several experimental datasets describing the motion of a single RBC in a linear shear flow. It is known that the motion of single RBCs strongly depends on the shear rate of the flow. At the high shear rate regime, RBCs undergo a tank-treading motion, where they acquire a stable orientation while their membrane performs a rotation around itself. The data for this regime, consist of the RBC tank-treading frequency (TTF), measured at various shear rates. In our inference, we take into account the variability between the different datasets, aiming towards a proper integration of experimental data for reproducible blood flow simulations. 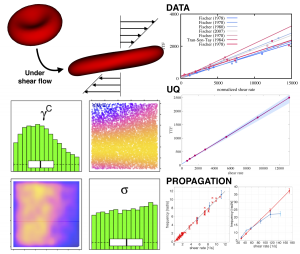