Visualization of the CMA-ES algorithm in a multi-modal function.

We develop Evolution Strategies (ES) for Optimization coupled with Local Learning models to tackle problems with expensive cost functions. ES are a class Bioinspired optimization  Algorithms  that mimic natural processes to ﬁnd optimal designs. In the successful translation of the natural evolution process into effcient and robust computer algorithms, model building plays a central role. Local meta-models are used to replace costly evaluations of the objective function by cheap estimates. We investigate and enhance ESs and we apply them to challenging real world problems.

The effciency of EAs for expensive problems can be improved by incorporating local meta-models of the cost function. We  enhance CMA-ES with a full quadratic local meta-model to improve the convergence speed of the CMA-ES. 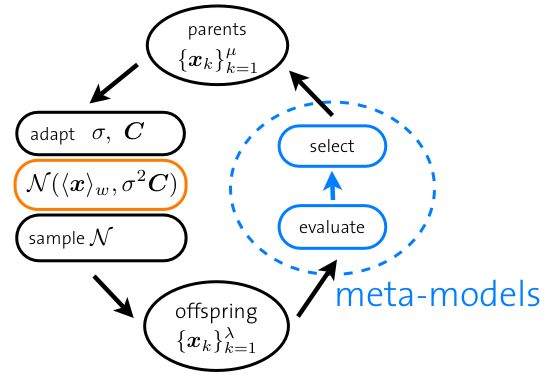 Given its roboustness and efficiency, CMA-ES results particularly suitable to address parameter identification in real world problems. In fact CMA-ES has been successfully applied to applications ranging from virus and pedestrian traffic, to the study of anguilliform swimming.